If you've seen my previous videos or my company website, you know I'm always looking for creative ways to measure and reduce electricity use.  A couple of months ago one of the 100W-equivalent compact fluorescent light bulbs in my kitchen burned out (right after I threw away the warranty info).  Not wanting to waste the opportunity, I decided to find out how much electricity the dead bulb was using relative to a working bulb.

The bad bulb in its original location. 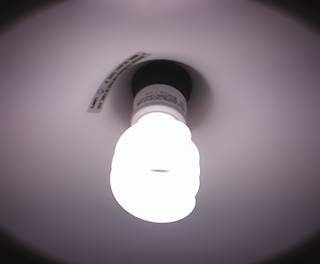 A nearby good bulb.

Since I wanted to measure power consumption of each bulb individually, I needed to remove them from their ceiling fixtures and install them one at a time into a lamp. I immediately noticed that the bad bulb showed considerably more discoloration to the plastic at the base. 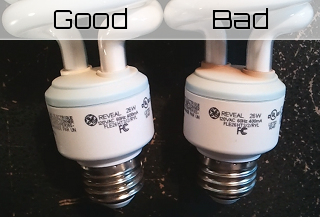 I started with the working bulb to establish a power consumption baseline. According to the Kill-a-Watt, the working 26W bulb drew about 23.5W at first, then settled around 22.3W after 10 minutes. 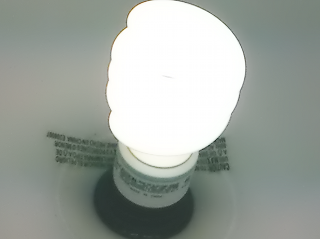 The good bulb installed in a lamp.

Power draw of the good bulb at power on and after ~10 minutes.

With a baseline set at 23.5W, it was time to measure the bad bulb. Surprisingly, the bulb was still consuming almost 50% of its rated power, even though it was barely producing any light. The burned-out bulb was measured at 9.8W initially, rising to 11W after 10 minutes. 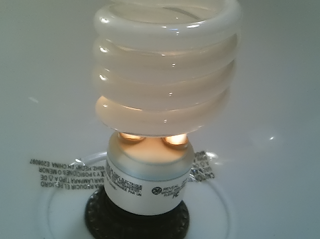 The bad bulb, installed for testing. 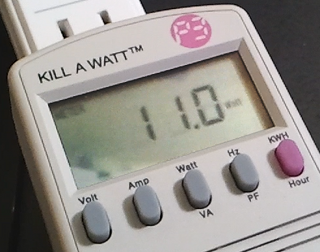 Power draw of the bad bulb at power on and after ~10 minutes.

A bad CFL bulb can still use 50% of the power of a good bulb (in this case 11 watts versus 22 watts). As such, it's important to replace a burned-out CFL right away. Not only is it darkening your room, it's consuming more than its fair share of power while doing so.